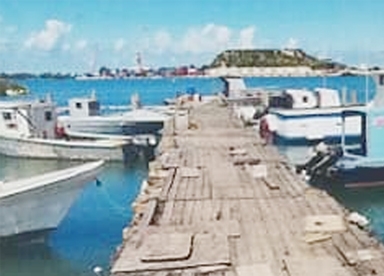 “I know the fishermen are hopeful and we will hold the government to its promise. We look forward to the expeditious commencement of the repairs,” opposition Senator, Richard Lewis said after the Cabinet announced its decision to provide improved docking facilities at the Keeling Point, just down from the Multipurpose Center within the inner St John’s Harbour.

It was shortly after the decision was made public that Lewis disclosed that he wrote to the Ministry of Agriculture, Fisheries & Barbuda Affairs about the deplorable state of the Keeling Point Pier on January 31, 2020.

Lewis, who ran on the United Progressive Party’s ticket in the St John’s Rural West Constituency in the last general elections, revealed — on social media — the role he played in drawing attention to the wharf, and added that he is “heartened that the Cabinet saw it fit to discuss the issue at its meeting on Wednesday 12, February 2020”.

The letter addressed to the Permanent Secretary in the Ministry of Agriculture, Colin O’Keiffe, described the frustration of “fishermen who ply their trade at Keeling Point Pier.”

It continued, saying that “conducting fishing operations have become extremely difficult for the fishermen” and “the state of disrepair has been affecting them as they are unable to efficiently navigate the pier in the process of transporting fish pots, fuel etc”.

In fact, “the instability of the pier has resulted in injury to some and there is the fear that someone will be seriously injured if restorative measures are not taken expeditiously,” the missive added.

According to the Cabinet, the Ministry of Works will be instructing its engineers to design and submit plans for a re-constructed Keeling Point wharf to the Development Control Authority.

The decision is “to enable fisherfolk and other boaters from that part of St John’s, to have a reasonably safe and secure dock”, the government said.