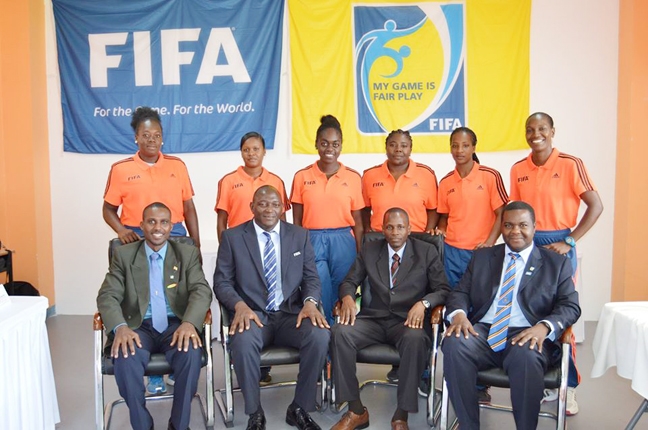 Referee assessor Denmore Roberts (front row, right), is seen here with other FIFA officials during a past referees seminar.
Spread the love

The Antigua and Barbuda Football Association (ABFA) could access up to US $50,000 of FIFA funding through the setting up of a local referee department.

This is according to a former president of the Antigua and Barbuda Football Referees Association (ABFRA) and current referee assessor, Denmore Roberts, who said the local body governing body has repeatedly ignored calls for the formalising of the committee.

“FIFA has mandated that there be a referee department that is staffed with people who are paid and the ABFA, for the past 15 years, have not set up theirs and so this year you would find that the ABFA has not gotten the FIFA funding for referees because they have not yet set up the referee department. They have not hired the person who is supposed to do that department and that person’s mandate is to find new referees and train new referees, set up the training sessions for referees, look about uniforms, look about matches and making sure that the ABFA programme runs properly,” he said.

According to Roberts, the committee allows for staffing that will be paid by FIFA, a move he thinks would serve to widen the FA’s pool of referees and introduce a more structured environment for all involved.

“It is supposed to be someone who has adequate knowledge of refereeing who would then be hired by the ABFA in a paid position and say, you run the referee department. In St Kitts it’s a guy called Malcolm Ramsey; if you go to Curacao, it’s an Antiguan lady who has lived down there for many years; if you go to Barbados, it’s a guy called Forde; in St Vincent it’s a guy called Francois, and so on. These people are hired to run those departments and in Antigua and Barbuda there is nobody hired to fill that position,” the former referee said.

Asked why he thinks the FA is yet to institute the department, Roberts said that in his opinion, referees are not at the top of the list of things deemed utterly important to the local association.

“To me, they do not have the willpower to get it done, or they do not think that refereeing is an important aspect of the football. It has been over 15 years that this has been outstanding, long since Peter Prendergast [veteran Jamaican referee] came here that this was mentioned to them [ABFA],” he said.

“If you look in the FIFA Forward programme, then you would see that refereeing is one of the strands. The ABFA has to pick eight out the 10 strands if they pick refreeing, then they have to set up the department,” he added.

In a recent interview, General Secretary of the ABFA, Rohan Hector, indicated that on completion of the office spaces at the FA’s technical and training center in Paynters, new staff will be hired to man new departments. He however, did not disclose which committees will be formed.