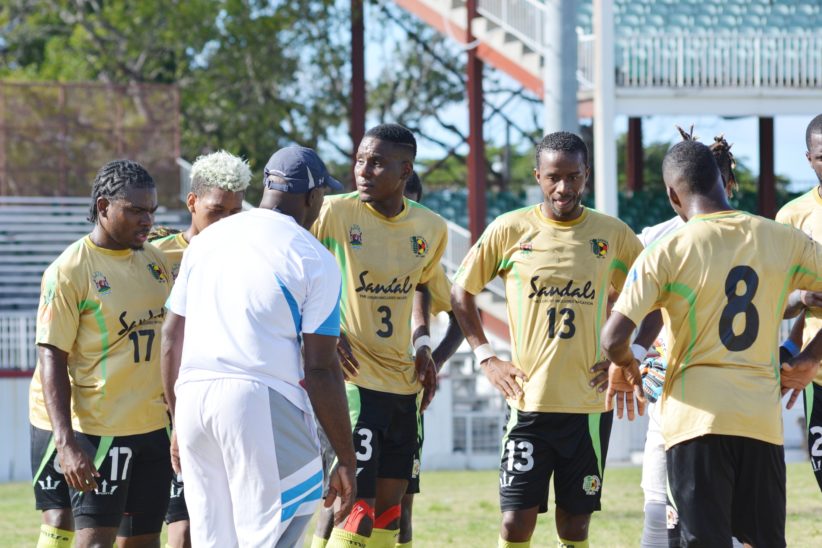 Former national striker and coach of the Grenades FC, Derrick Edwards, said Sunday’s crucial 2-1 victory over Greenbay Hoppers in the football association’s Premier Division has served to ease some of the pressure on his players as they hunt their first top flight title.

The victory was Grenades’ eighth in 12 matches as they move to 26 points, six more than Hoppers who have 20 after the same number of showings.

“You can say that, it eased some of the pressure on us because now, they are behind of us by two games, but at the end of the day, we have to give Hoppers some credit. They are a good team and they kept coming at us for the whole evening and it just goes to show that when two teams meet, you have to understand that it is the team that scores their opportunities will win the game,” he said.

Grenades had to play from behind for their 2-1 victory in Sunday’s feature contest at the Antigua Recreation Grounds (ARG). Cuban import, Yoandir Puga Estevez gave Hoppers the advantage from the penalty spot in the 13th minute. Jairo Escobar drew Grenades level on the stroke of halftime, before Blake Thompson found the winner in minute 71.

The six-point gap represents the largest of the season for Grenades and puts the Jennings men in an advantageous position going into the final six games of the competition.

There was victory as well for Ottos Rangers as they shot into the number three position on 19 points with a 3-2 victory over All Saints United.

Playing in the day’s opening contest, Rangers had a double strike from Lloyd Jeremy who netted in minutes 53 and 83 while there was an own-goal from Kwaizim Theodore who inadvertently put the ball into the back of his own net in minute 28.

Coach of the Rangers team, Renee Sellwood, said his players are ensuring they stay within striking range of the leaders.

“The players understand that if we slip we slide because everything is still close with the exception of maybe one or two teams, everybody else can climb the ladder and maybe pass us, but what we are doing is taking it as a game by game approach. We try not to get ahead of ourselves, we try our best to analyse the upcoming opponent and give the players as much information and planning and keeping them focused on it,” the coach said.

Carlos Tittle and Kenijah Challenger were on target for United as they remain on 13 points and third from bottom in the 10-team standings.

In the other match contested Sunday, Swetes defeated a struggling Parham FC, 3-1. Striker Azinho Solomon recorded a double strike while Carl Osbourne scored in added time to hand Swetes their fifth victory after Daryan James had put Parham ahead in minute 38.

Coach and former national player, Kerry Skepple, took delight in watching his team play from behind to take the three points, something he said they have struggled with all season.

“Knowing the quality we have in the team and to see that we are giving up, sometimes coming down to the end of the match, it kind of showed a little weakness but now we are starting to become a little more mentally strong where we are playing right down to the end,” he said.

Parham, former champions, remains at the bottom of the standings with just six points from their 12 showings.