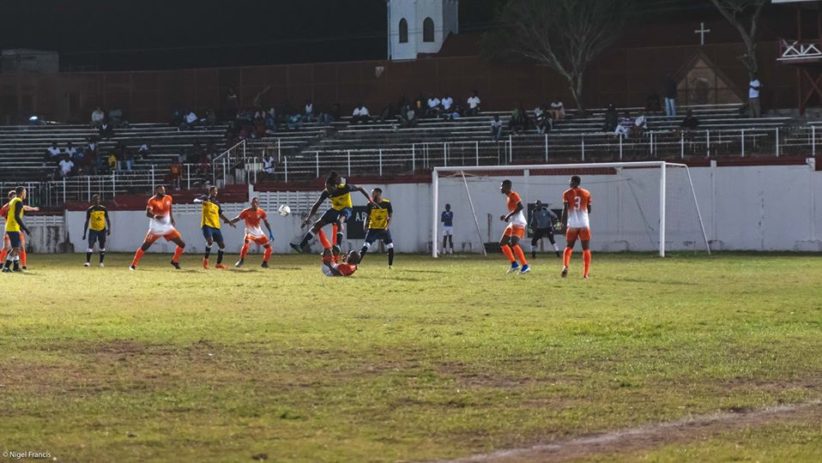 Pigotts Bullets picked up a crucial win over Five Islands on Wednesday.
Spread the love

Fitzroy Rewinding Pigotts Bullets picked up their fifth victory in the Antigua and Barbuda Football Association’s (ABFA) Premier Division on Wednesday when they rallied to a 1-0 victory over the struggling Richie Rich Five Islands at the Antigua Recreation Grounds (ARG).

Kimon Harrigan scored the lone goal of the match when he pushed home from close range in minute 52. The win moves Bullets to 18 points and sixth in the 10-team standings after 12 matches. The loss was however Five Islands’ seventh in 12 outings as they remain second from bottom with 11 points and still in the two-team relegation zone.

Tyrique Tonge was the day’s hero when he struck in minute 52 to put SAP to 34 points and to the top of the standings. SAP has however played 16 times, two more than closest rivals Empire and Tryum who are on 32 and 30 points, respectively. John Hughes remain on 20 points and eighth in the 12-team standings.

Still in the First Division, Willikies quieted Police 4-0. Novelle Francis Jr, D’Jarie Sheppard, Mehki Sheppard and Jaunte McDonald all scored once in the comfortable victory as Willikies moved up to the ranks and into the seventh position with 21 points.

In the other First Division contest, Fort Road defeated Westham 2-1. Jaumal Semper and Alren Lewis were on target for Fort Road, while Anderson Lightfoot scored the lone goal for Westham.

Fort Road moved to sixth in the standings with 23 points, while Westham continued to occupy the cellar with just two points.

There was victory as well for Attacking Saints as they beat Glanvilles 3-0 to move into the third position in Zone A of the Second Division. Leon Tittle had a hattrick for Saints, scoring in minutes 16, 41 and 57 respectively.

Court Marshall lay down the law in Division Three basketball